Geneva, a city with a population of over 200,000, is one of the most international cities in Europe (expats make up 40%+ of the population) largely because it is home to many international organizations led by the United Nations and international banks. It is also incredibly central in Europe, where in 24 hours you can reach every corner of Europe by plane, train and car. The city, which was modest at the turn of the last century, is now one of the most affluent and likely one of the most expensive in the world. That said, its backdrop with the French and Swiss alps, Lake Geneva, and many farm lands make it an idyllic, must-visit city in Switzerland.

More personally, I was born in Geneva, Switzerland where my father was working for the United Nations. In many ways, Geneva over the years has been a second home. I lived there as a toddler, studied there as an adolescent, and visited there many times as an adult. But in all those years I never knew where I was exactly born. It is said that you have a subliminal connection with where you are born (at least that is what astrologists say). So I decided to do a walking tour of Geneva, one of the world’s most international cities, in search of my birth place. And to also visit my favorite places in Geneva to eat, see, and enjoy.

COVID TEST: As of the time of writing this blog, after two years of strict COVID protocols, Switzerland lowered its COVID entry requirements, and frankly it’s mask mandate policy throughout the country. I just showed my vaccination materials and I was in. That said, make sure to always check what are the most up to date requirements from the country you are residing in as well as your vaccine status. Note, to make sure I have the most updated requirements, I always call my airline and ask and typically they know what exactly is required to enter your destination.

PLANNING: I had only one day in Geneva before heading to the alps to ski with some close friends on our annual ski trip (check out the blog/vlog: ‘How to be best prepared to have an amazing ski vacation’). So I looked at a google map and outlined my exact route and planned the whole day in terms of where to visit, what to eat, and what to do. 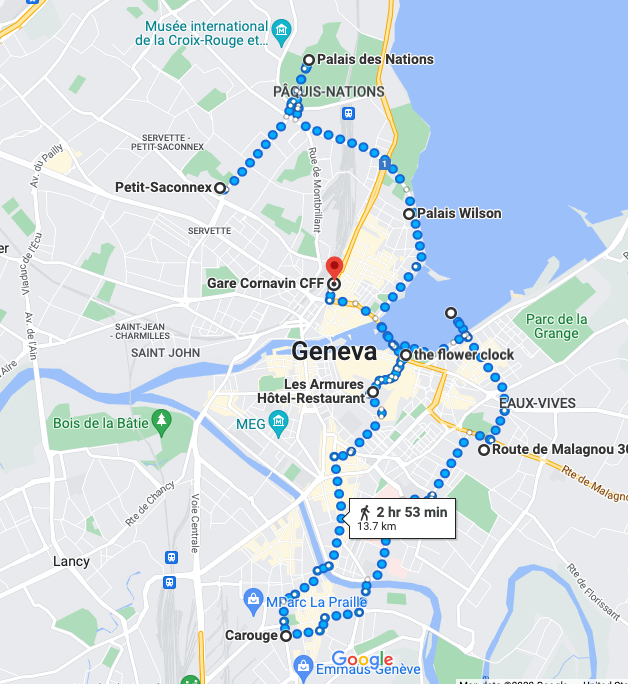 This is key when you have limited time, and have a goal. In my case, not only showcasing the city from the eyes of an expat, but to actually visit my place of birth. Thankfully it all worked out and I ended up clocking in close to 35,000 steps that day. 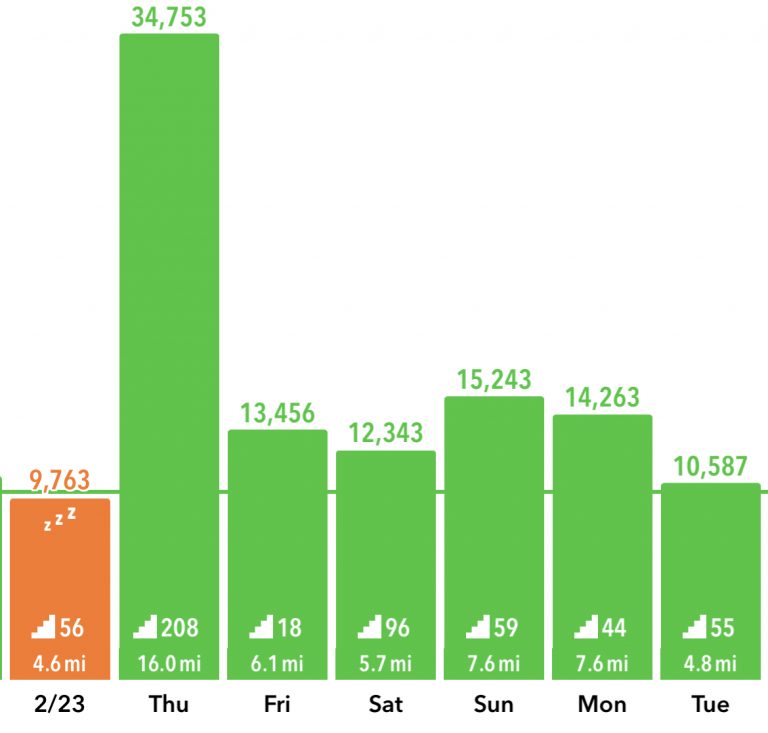 To make it easier to follow, in this section I will outline the walking tour of Geneva describing the sites I visited, some of my favorite dining spots, and finish the tour where it all began, at my place of birth.

I started the day in Petit Saconnex, a residential area close to Geneva airport (lots of expats live here), where I lived as a child. I then walked about 20-25 minutes to the Palais de Nations, a must for anyone interested to know why there are so many expats in Geneva. There you will find the main United Nations building as well as related organizations including UNHCR, WIPO, ITU, WMO, WHO among many others, as well as other major international organizations in or nearby the center such as ICRC, ILO, WTO. 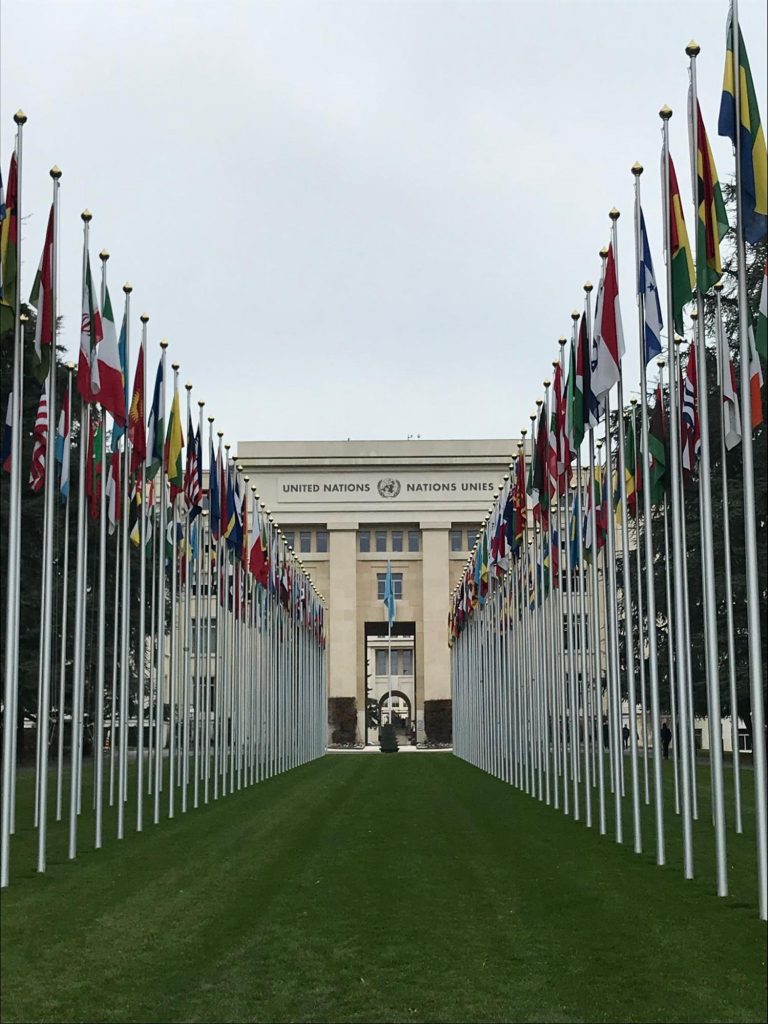 Walking to the lake you can take a stroll along the boardwalk seeing the Jet d’eau on the opposite side of the lake with the alps in the backdrop (including, if you are lucky on a clear day, Monte Blanc, Europe’s highest mountain). Along the walk you will find some of Geneva’s most well known hotels including the Beau-Rivage, Hotel de la Paix (Ritz), and the Hotel des Bergues (Four Seasons) among others. You will also see the Palais Wilson, the site of the old League of Nations building (the predecessor of the U.N.) named after U.S. President Widrow Wilson. On this trip there were some cool art installations along the walkway. 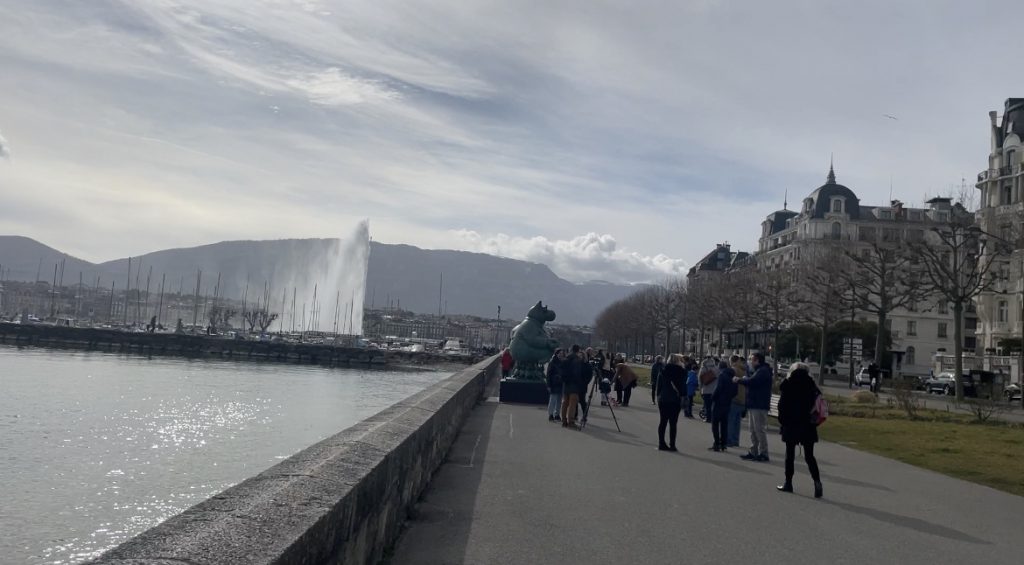 When you get to Pont du Mont Blanc, you can either take a left or a right. I started with taking a left and took a picture in front of the famous flower clock of Geneva created in 1955 that is constantly planted to reflect the seasons. 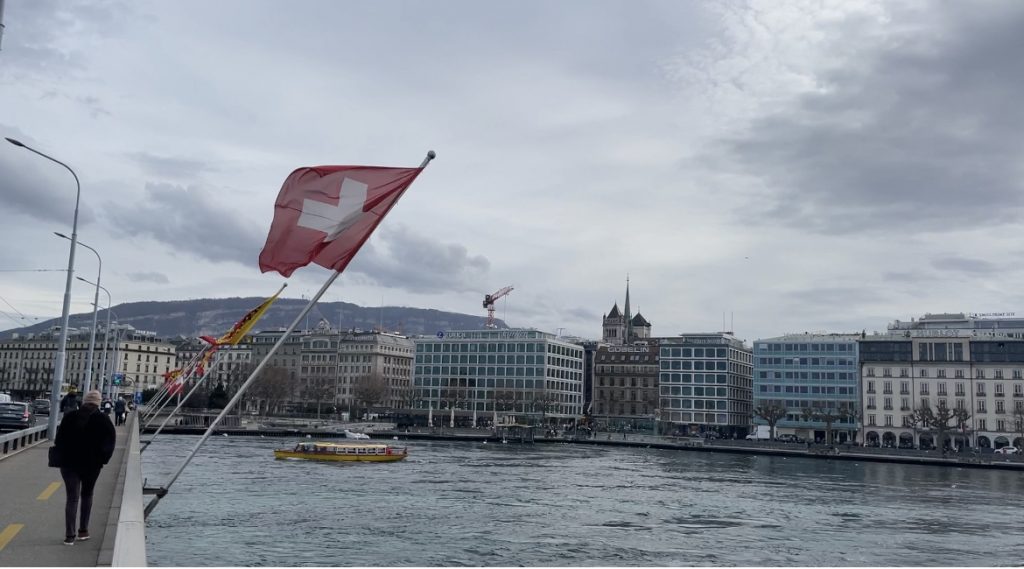 Remember Switzerland is largely known for banking, chocolate and of course watches. So many flock to this clock to see it in action! 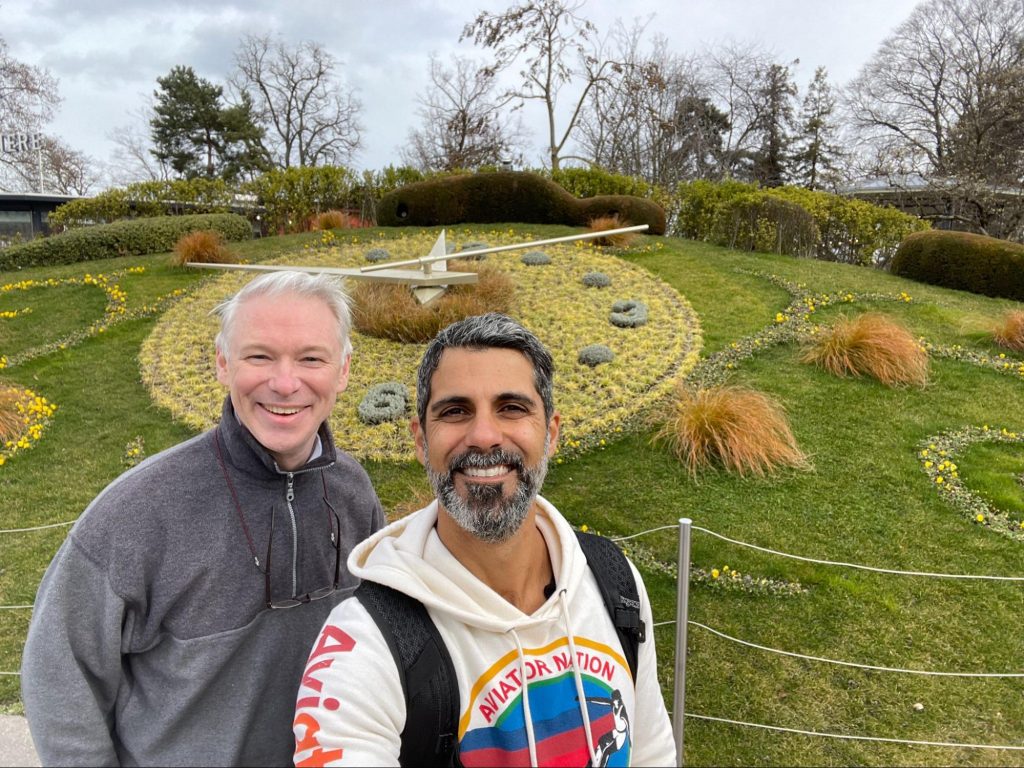 Heading south, I walked through the bustling area of Rue de Marche, the main shopping area of Geneva, and up into the old town (vieux ville), that dates as far back as the Roman times. What’s cool about the old town is the juxtaposition of different architectural styles reflective of the many chapters of its history. Make sure to stop at Place du Bourg-de-Four the oldest in Geneva as well as the plethora of galleries, coffee shops and restaurant (more on this later).

After walking around the old town I headed southwest to the unique area of Carouge, walking by the Theater of Geneva, University of Geneva, and other notable landmarks en route. Carouge is known as Geneva’s Greenwich village, and made famous by the Italian Savoy Kings reflecting a more modern Italian style. I love this area not only because it feels like a uniquely trendy part of Geneva, but it also was where my father first exhibited as a ceramist in the early 1960s and continued to do so for over 20 years thereafter. Specifically he exhibited in Galerie Contemporaine at Pl. du Temple 4, which no longer exists but was still worth stopping by for old times’ sake. Make sure to check out my fathers Website, which I created for him on his 85th birthday (as well as the instagram dedicated to his art: @zahawiart). 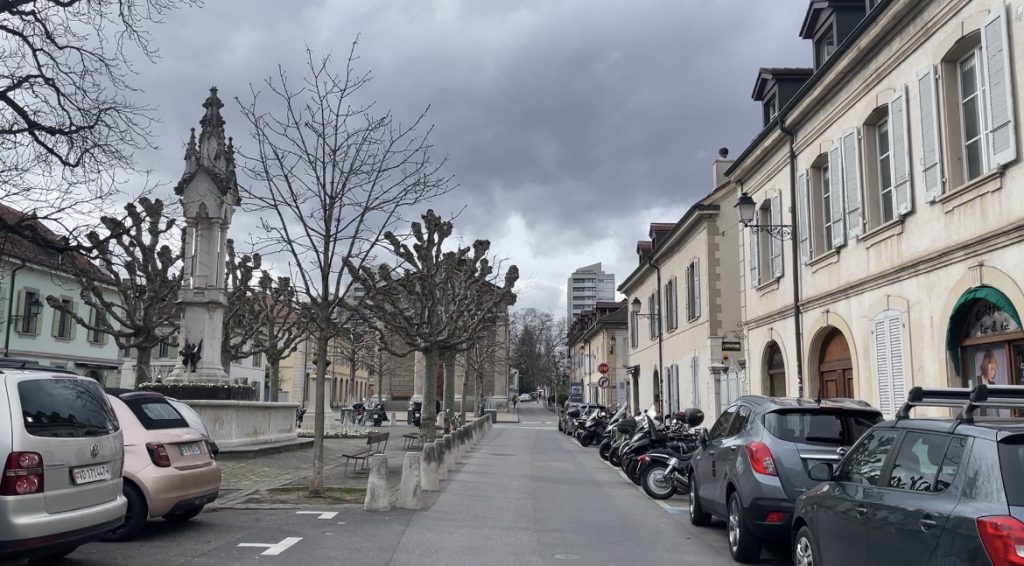 Before I went to Geneva I asked my mother where I was born. Thankfully she remembered: Clinique Bois-Gentil. But she could not remember where it was. After a few Google searches I found that the birthing and surgery clinic, built in 1929, was torn down to make way for a residential building in 2002. 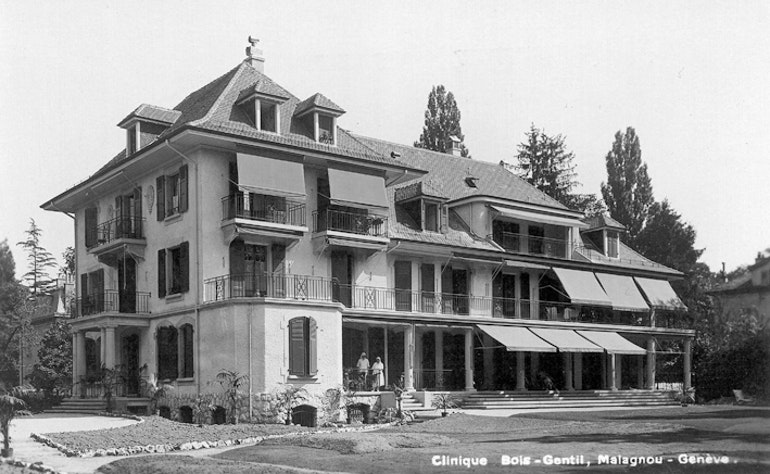 That said, I was still determined to see it so I headed northeast, and after 25 minutes made it to Route de Malagnou 30. There it was on a small side street, a large white residential compound where the clinic once stood.

I have to say it did feel somewhat surreal standing there, knowing that after so many life experiences, challenges, accomplishments, this place, on this piece of soil once stood a building and a room, where I saw the light of day and my life ‘started’.

Astrologists believe there is a significant connection between where you are physically born and the trajectory of your life. While I do not typically subscribe to astrology, I did feel a moment of subliminal catharsis at that exact location. 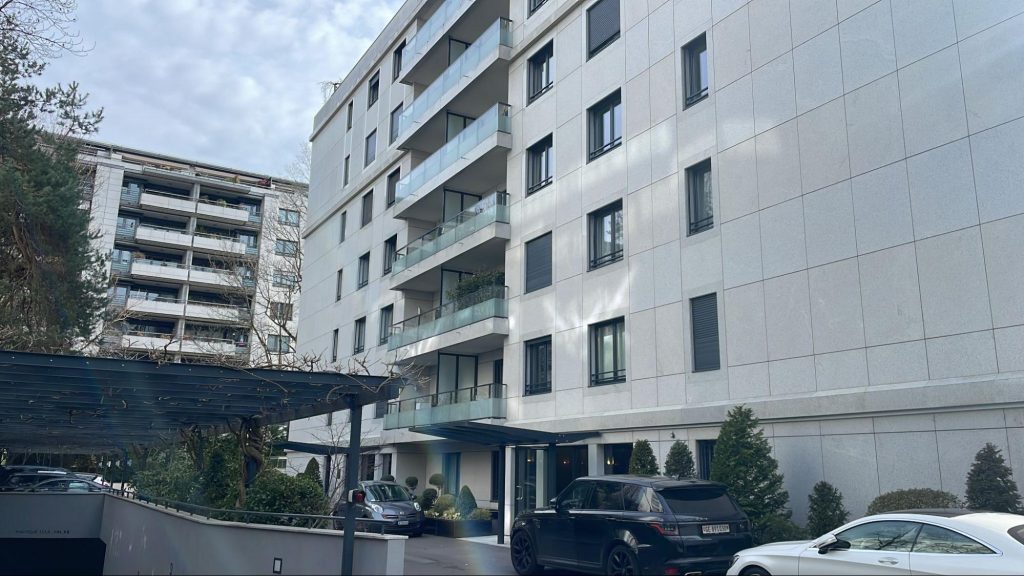 Residential Building at Route de Malagnou 30 where clinic once stood

Before wrapping up the walking tour, I decided to visit the Jet d’eau about 15 mins from the old clinic. The water fountain is one of the highest in the world at a maximum height of 140 meters, with water flowing out at 200kph, and was initially created in 1891 as a tourist attraction. You can also see many swans and other birds right next to it on the lake. I would also highly recommend taking a taxi boat tour of the lake, all the way down to Montreux, stopping in lakeside cities including Nyon, Lausanne and Vevey.

After walking back across the Pont du Mont Blanc, I headed for the main train station of Geneva, Gare de Cornavin to take a train to go skiing. You can literally get to every corner of Europe starting from this central station. 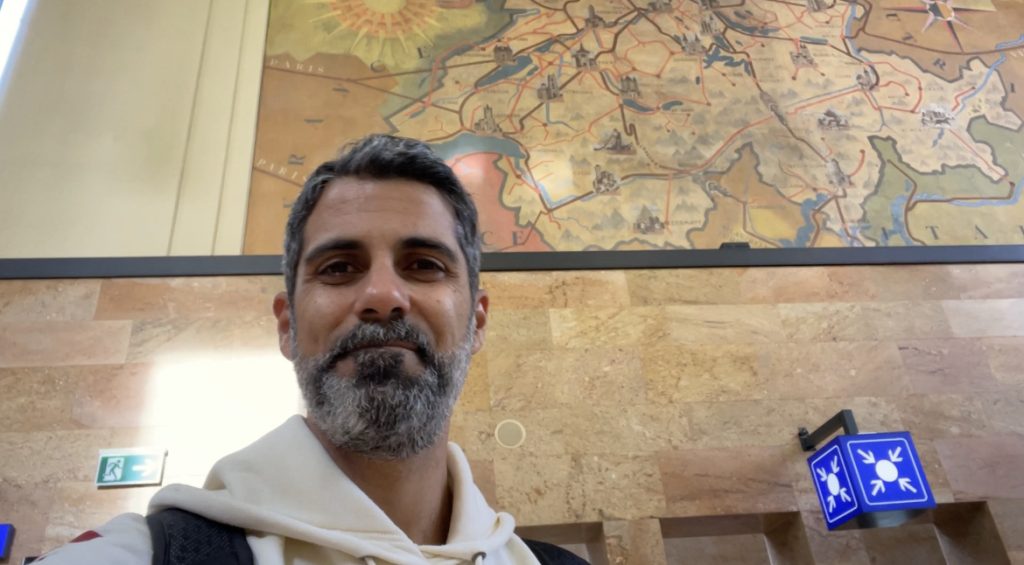 Near the station are some iconic restaurants and great souvenir shops. 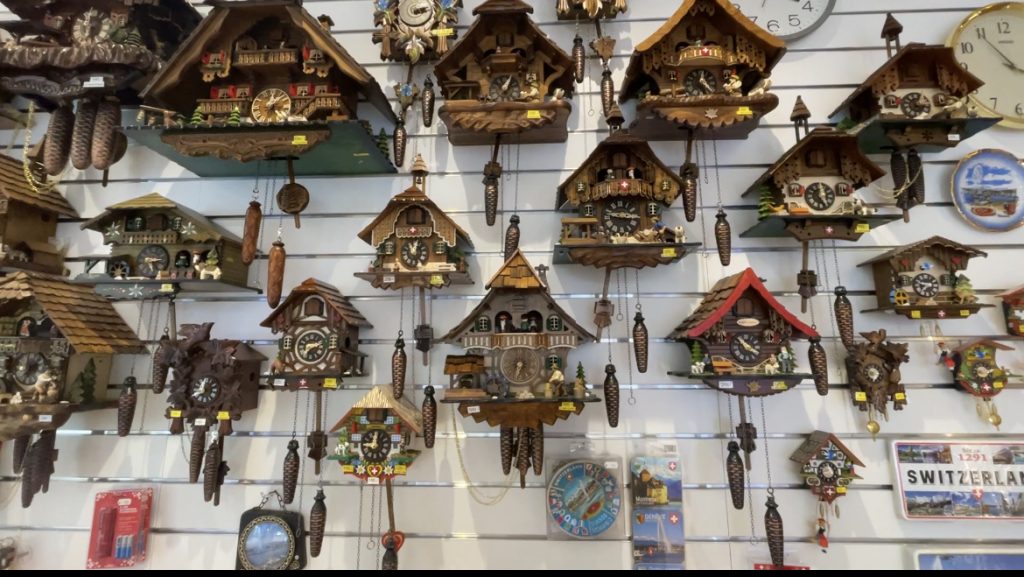 If you have more time in Geneva, do visit Evian (you know the water), Dijon (you know the mustard), Geryere (you know the cheese), Yvoire (ancient picturesque town), and Annecy (the city is on a beautiful lake that was cleaned up making it one of the cleanest lakes in the country).

Annecy and its crystal clear lake

Of course you can also go skiing in some of the world’s best ski resorts including Verbier, Chamoix, Zermatt among many many others! After Geneva, we went to Verbier, which is about 2 hours away! 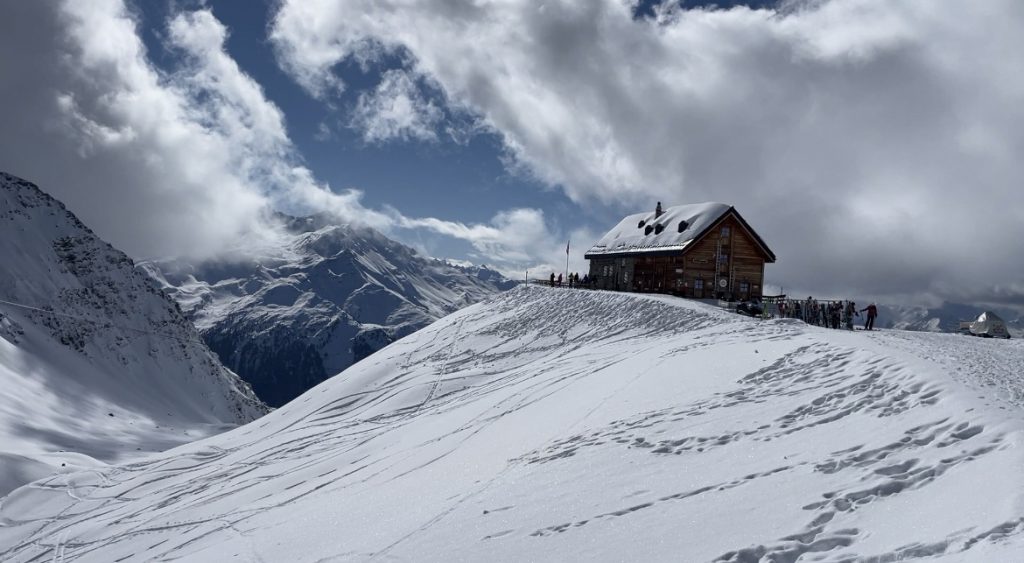 Even though Geneva is insanely expensive (I think the cheapest things here are bread and ice tea) it still has some of the best food I have ever had. Here are some of my favorites that you MUST check out: Cafe du Soliel (quite frequented by expats and has some of the best fondue in town), Cafe de Paris (right next to the train station, that has entrecote (steak) and frites (fries) to die for, and the salad here for some reason is one of  the best I have had), and Les Armures (possibly the most well-known restaurant in the city where the world’s famous celebrities and dignitaries frequent): 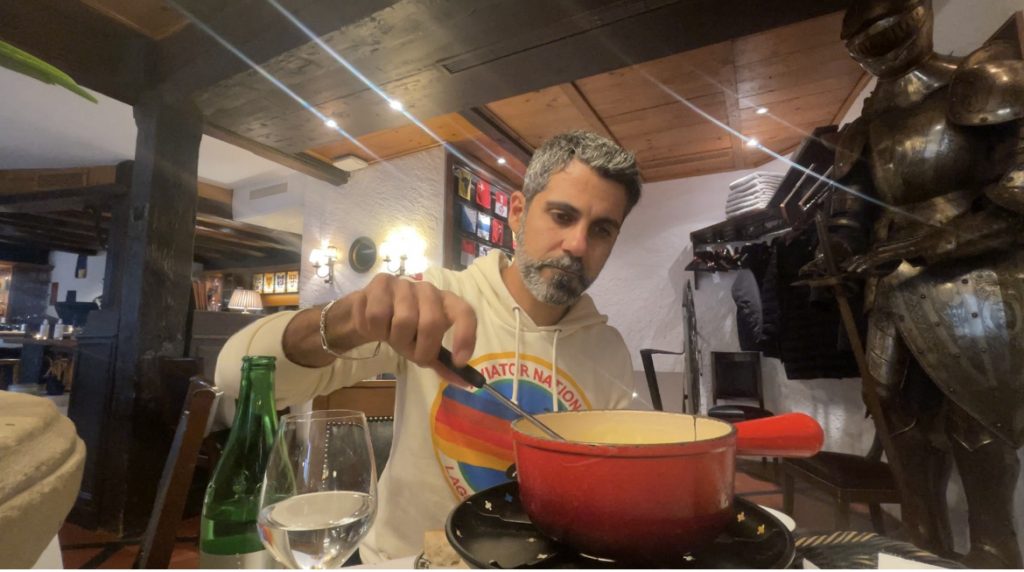 A few other notable mentions include Chez Ma Cousine (a non-pretentious chain that serves up the best chicken, fries, and salad at a super low cost anywhere in the city!), Charbonnade at Taverne du Valais (where you can cook meat on your own fireplace). 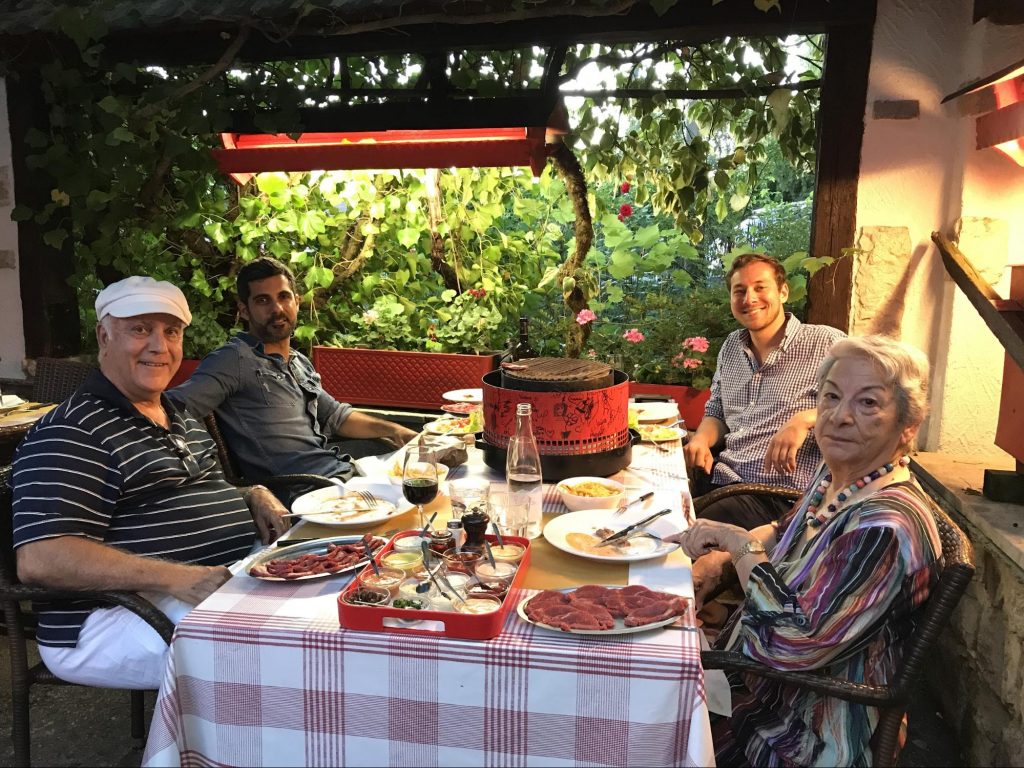 And La Potence at Le Grizzly Sarl (a medieval looking dish that is made up of filet mignon, pineapple, rice and over 10 different sauces all flambéed to perfection)! 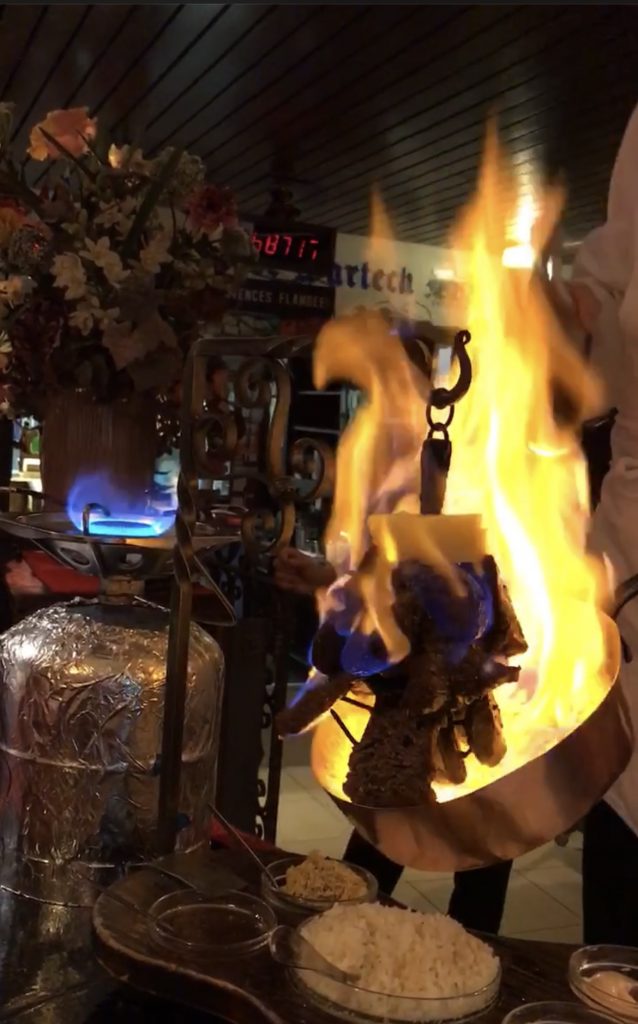 This is certainly not an exhaustive list but the restaurants I have frequented many many times over the years.

Geneva will always hold a very dear place in my heart. And while it may not be the most dynamic city in Europe, it certainly has incredible topography, history, culinary delights, diversity and many many warm memories for me. I would certainly stop here en route to other locations throughout Europe, given its centrality, while making the best out of all that the city has to offer its locals, expats, and tourists alike. 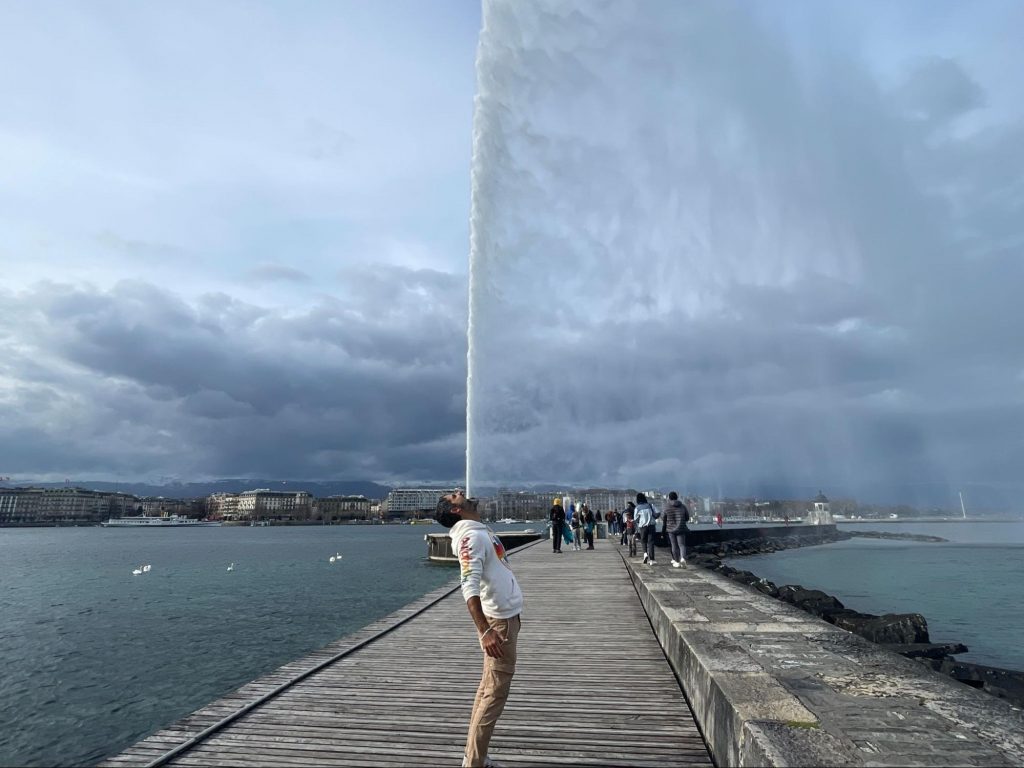 PUBLIC TRANSPORTATION: In all honesty, Geneva is one of those cities you really never need a car. Buses, street trams, water ferries, and taxis/rideshares can take you to every corner of the city (in fact you can set your watch to the bus schedule since it runs incredibly on time). Also the airport is very close to the city center and the train runs through it, so you can walk off your flight, into the train and head to the mountains in under 3 hours!

If you made it this far, you are hopefully loving my Final50 journey. Make sure to check out our blog for planning the perfect ski vacation in Switzerland:

Stay Curious. And I look forward to seeing you on my next journey!

The long-awaited Uzbekistan Part 2 is now live on

When I visited Uzbekistan I was immediately immers

I just got back from an awesome trip to SAMOA (fir

Minor Mosque is one of the most beautiful mosques

The majestic beauty of Arches National Park is a s

😁 I recently visited Uzbekistan, and it was one

Happy New Year to all those that love life, love t

Excited to maximize this life journey and together spread the message for more intentional and responsible travel. 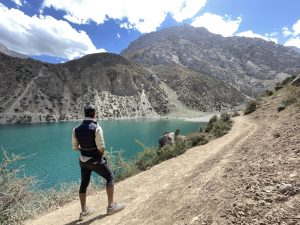 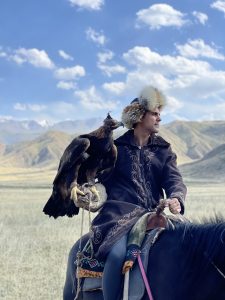 Living like a Nomad with Eagle Hunters in Magical Kyrgyzstan 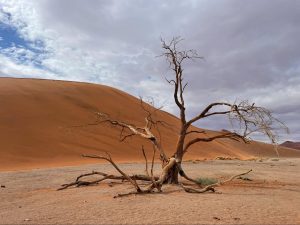 A Fated Journey to the Fabled Red Dunes of Namibia